What Next For Britain in the Middle East? 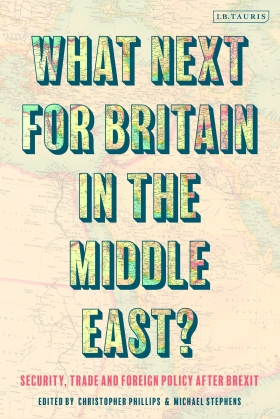 As the UK enters a period of intense public introspection in the wake of Brexit, this book takes on one of the key questions emerging from the divisive process: what is Britain’s place in the world? The Middle East is one of the regions the UK has been most engaged in historically. This book assesses the drivers of foreign policy successes and failures and asks if there is a way to revitalise British influence in the region, and if this is even desirable.

The book analyses the values, trade and security concerns that drive the UK’s foreign policy. There are separate chapters on the non- Arab powers – Israel, Turkey and Iran – as well as chapters on the Middle Eastern Arab states and regions including the Gulf, Iraq, Egypt, and Syria and the Levant. The contributions are from leading specialists in the field: Rosemary Hollis, Michael Clarke, Ian Black, Bill Park, Christopher Phillips, Sanam Vakil, Michael Stephens and Louise Kettle. They each explain and re-assess the declining western influence and continued instability in the region and what this means for the UK’s priorities and strategy towards the MENA. This is an essential book for policy makers, journalists and researchers focused on foreign policy towards the Middle East.

‘A timely and trusted guide – smart thinking from respected scholars who understand the past and provide impressive insight into the future of a fast-changing map of Britain and the Middle East. Here are the right questions, and the right kind of answers with rigorous analysis and advice.’ – Lyse Doucet, BBC Chief International Correspondent

The Battle for Syria 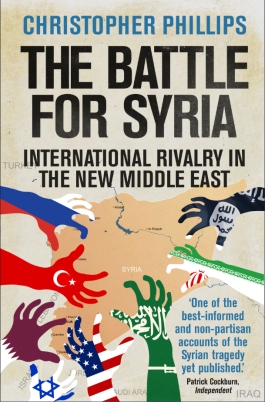 Most accounts of Syria’s brutal, long-lasting civil war focus on a domestic contest that began in 2011 and only later drew foreign nations into the escalating violence. Christopher Phillips argues instead that the international dimension was never secondary but that Syria’s war was, from the very start, profoundly influenced by regional factors, particularly the vacuum created by a perceived decline of U.S. power in the Middle East. This precipitated a new regional order in which six external protagonists-the United States, Russia, Iran, Saudi Arabia, Turkey, and Qatar-have violently competed for influence, with Syria a key battleground.

Drawing on a plethora of original interviews, Phillips constructs a new narrative of Syria’s war. Without absolving the brutal Bashar al-Assad regime, the author untangles the key external factors which explain the acceleration and endurance of the conflict, including the West’s strategy against ISIS. He concludes with some insights on Syria and the region’s future.

‘Syria’s horrific civil war has been profoundly shaped by the competitive interventions and proxy wars by external powers. The Battle for Syria offers a brilliant, essential account of the international dimension of Syria’s descent from uprising into insurgency and brutal state violence. This sober and judicious book will become a standard text for those seeking to understand Syria’s tragedy.’ – Marc Lynch, author of The New Arab Wars: Anarchy and Uprising in the Middle East

‘This is the best work to date that focuses on the regional and international dimensions of the Syrian conflict. Christopher Phillips’ research is meticulous, with both depth and breadth in large part gleaned from his interviews with top officials and representatives from most of the stakeholder states and groups in the war. A must-read for anyone who wants to better understand the multidimensional complexities of the conflict.’ – David Lesch, author of Syria: The Fall of the House of Assad

‘This judicious and measured book stands well back from the Twitter-driven ‘war of narratives’ that has distorted too much media reporting on the Syrian conflict. In the heat and controversy of complex and terrible events, it is helpful to pause and look coolly at the big picture. But it is sobering to contemplate the damning evidence of how outside actors helped fan the flames of ‘an internationalised civil war’ without any end in sight.’ – Ian Black, former Middle East editor at The Guardian

‘Christopher Phillips’s brilliant analysis of the factors fueling the Syria war is a refreshing contrast to works by most ostensible experts, who are partis pris, ill-informed, or both. Phillips joins a short list of writers… who have made original contributions to understanding the Syria war’s causes and consequences.’ – Charles Glass, author of Syria Burning

‘Phillips has produced an account of the conflict in Syria that is wide-ranging and authoritative, and should be considered essential reading for both the layperson and the scholar. It is unusual that a book focused primarily on Syria has demonstrated such a thorough grasp of regional conditions as well as the idiosyncrasies of so many actors, both within and outside the region. However, as the war drags on, and the local factors of the conflict are subjected to those at the regional and global level, this account will be vital to understand how Syria’s war will progress in the future, and more importantly how it can finally be brought to an end.’ Michael Stephens, RUSI

‘The Battle for Syria: International Rivalry in the New Middle East by Christopher Phillips, is one of the best informed and non-partisan accounts of the Syrian tragedy yet published. He judiciously weighs the evidence for rival explanations for what happened and why. He understands the degree to which the agenda and pace events in Syria were determined externally by the intervention of foreign powers pursuing their own interests.’ – Patrick Cockburn, author of The Age of Jihad

‘Given Syria’s “war of narratives,” the truth is hard to get at. But this is a remarkably clear account of the real motives behind the blizzard of propaganda enveloping Syria…The Battle for Syria is a brilliant handbook for policymakers—if such a thing is required in the Trump White House. It is a guide to the immense complexities of this war.’ – Paul Wood, BBC correspondent and fellow at New America.

‘This book goes a long way towards penetrating the fog of war, and will be seen as the definitive account of the international dimension of the ‘battle for Syria’. Based on meticulous research and masterful analysis, and with a felicitous writing style, it uncovers the multiple agent behind Syria’s tragedy…This book deserves to take its place alongside other classics of International Relations scholarship of the modern Middle East’ Raymond Hinnebusch, author of Syria: Revolution from Above

‘If you look at the Syrian war as a war by proxy, this is, I would say, the best book…This book by Christopher Phillips I found to be one of the best books I have read on this period, particularly the international factor. It is very multifaceted.’ Nikolaos van Dam, author of The Struggle for power in Syria and Syria: Destroying a Nation.

‘Phillips has provided an excellent account of the role played by external actors in the Syrian civil war…The Battle for Syria is an essential guide for understanding the international aspects of the Syrian conflict that have taken place since then. It is, in my view, a book that scholars, students, and the interested public will all find useful.’ Prof. Mark Katz, George Mason University

Click here for Charles Glass’ review in the Intercept, 29 October 2016

Click here for Patrick Cockburn’s comments in The Independent, 2 December 2016

The Daily Reproduction of the Arab World 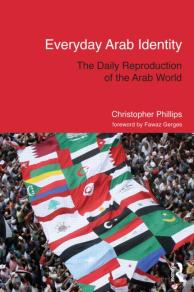 Whether through government propaganda or popular transnational satellite television channels, Arab citizens encounter a discourse that reinforces a sense of belonging to their own state and a broader Arab world on a daily basis. Looking through the lens of nationalism theory, this book examines how and why Arab identity continues to be reproduced in today’s Middle East, and how that Arab identity interacts with strengthening ties to religion and the state.

Drawing on case studies of two ideologically different Arab regimes, Syria and Jordan, Christopher Phillips explores both the implications this everyday Arab identity will have on western policy towards the Middle East and its real life impact on international relations.

Offering an original perspective on this topical issue, this book will be of interest to academics and practitioners working on the Arab world and political affairs, as well as students of International Relations, Political Science and the Middle East, notably Syria and Jordan, and policymakers in the region

Click here for Moinuddin Ahmad’s review in The Statesman, April 2013

Christopher Phillips is Professor of International Relations at Queen Mary, where he is also a Deputy Dean. He regularly appears in the broadcast and print media and consults governments, NGOs and private companies on geopolitics and security. He is author of Everyday Arab Identity (2012) and The Battle for Syria (2016 [2020]) and co-editor of What Next for Britain in the Middle East? (2021) The opinions expressed here are his own.