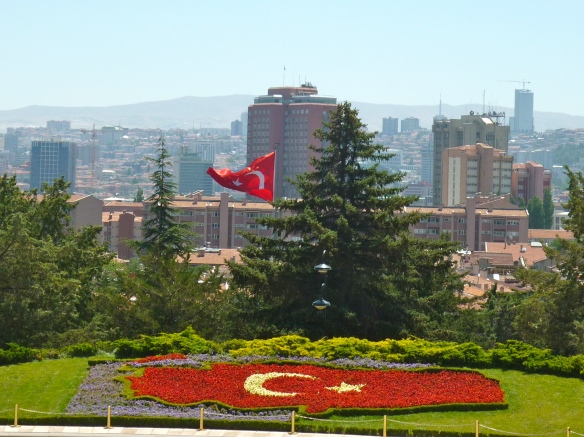 The view from MK’s place

The house that MK Built 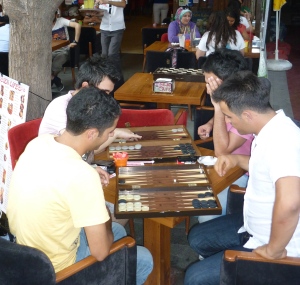 What to say about Ankara, Turkey’s capital? Well firstly, it’s no Istanbul. Not that we should expect it to be. After all, prior to Ataturk establishing his base here in 1920 at the beginning of the Turkish War of Independence, it was a small town with a population of 30,000. Today it boasts 4.5 million residents, so it’s come a long way in a short time. Even so, it feels a little like Washington DC to Istanbul’s New York: charming enough, but primarily designed to be a functional seat of government rather than an organically evolved metropolis with layers of history on every corner. Of course the designer, as such, was Mustafa Kemal Ataturk (MK), who didn’t set foot in Istanbul from 1919-1927 in an attempt to establish his new (more easily defendable) city as the centre of his new country. Not surprisingly then, Ankara has a clearly Kemalist character. Cafes pepper the tree-lined streets where secular Turks spend the evenings drinking Efes beer and playing board games – now recently joined by rows and rows of big screens for the city’s many students to play football video games. Even more than central Istanbul, very few women are veiled.

Yet despite the various ministries, think tanks, universities and political party headquarters that have drawn me here, Ankara’s most interesting site is actually one over which Ataturk had no input: his tomb. It took almost 20 years to complete after the big man’s death in 1938, but the Anit Kabir, located on a hill overlooking the capital, is suitably imposing. At once peaceful and intimidating, the complex draws on both modernist and classical styles with a huge marble square surrounded by colonnades leading up to the Lincoln memorial-esq mausoleum. In a tribute to MK’s maxim of, ‘peace at home, peace in the world’, the complex sits within a large public ‘peace park’ where local families promenade throughout the day. Beneath the tomb itself stretches a massive museum featuring Ataturk’s life and the war of independence, the stuffed remains of his favourite dog(!), and a selection of his clothing – dapper! Interestingly, the vast majority of visitors were Turks. There were a handful of foreigners such as myself and the rather irritating tour of Malaysians in bright turquoise polo shirts, but most were nationals who seemed to be on something of a pilgrimage. Strikingly, large numbers of veiled girls and bearded men queued up to have their photo taken beside the 40-ton cenotaph representing Ataturk’s body – ironic given that he was the one who banned the hijab from public buildings. Yet it struck me that perhaps respect for Turkey’s founding father is something that transcends the secular and religious divide that seems to seep into most other aspects of society.

I’ve discussed these divisions before but this week I thought I’d focus on the political manifestations of Turkey’s secular-Islamist dichotomy. It was perhaps fitting that my stay in Ankara coincided with the conference of the centre-left Republican People’s Party (CHP), Ataturk’s party and now the main opposition to the ruling moderate Islamist Justice and Development Party (AKP). As such, banners with the CHP logo (six arrows representing Ataturk’s six principles of republicanism, nationalism, statism, populism, secularism and revolutionism – thank you Wikipedia!) adorned Ankara’s streets. The continued success of the AKP, winning three general elections in a row since 2002, has snapped Turkey’s secular parties awake. Throughout the 1990s various leftist, nationalist and centrist secular parties came and went in coalitions and minority governments in an era defined by divisions among the political elite and the continued interference of the military. However, the seeming unstoppable behemoth of Prime Minister Erdogan’s AKP has forced a lot of secularists to coalesce around a single party with a rejuvenated CHP the main beneficiary after years in the wilderness. It improved its electoral performance from 9% of the vote in 1999 to 25% in 2011. Though they’re still way behind the 50% won by the AKP, they have now emerged as the main opposition party – effectively turning the current political arena into a two-party system.

With its Kemalist roots I wasn’t surprised that the CHP appeared popular among the few Ankarans I spoke to (though the AKP won the parliamentary seat in 2011, suggesting the hinterland is more conservative than the secular centre). One taxi driver, a self confessed Leninist-Marxist, said he thought that Erdogan was, “crazy.” The only people who vote for the AKP, he said, were, “poor people who need their heads checked.” But, he conceded, they were popular, once again emphasizing the dilemma of the secular minority when confronted with an Islamist party that genuinely appears to reflect the will of the more religious majority.

I actually visited the CHP headquarters the day before their conference began to discuss their foreign policy agenda. I had earlier attempted to speak to someone at the AKP but no one was available for comment. In fact my experience of the two parties couldn’t have been more different. While the AKP building was surrounded by police and eventually unenthusiastic about helping me, I was able to waltz into the CHP building unannounced and, after a five minute wait, invited up to the office of the Vice-chairperson in charge of foreign relations for an interview. This probably says more about how busy and security conscious the party of power is in contrast to the opposition, but still, it left the impression of the CHP being more welcoming. Or, perhaps, that they were keener for the outside world to hear them.

Syria: something more to argue about

The dichotomy runs deeper than just active politics, however, it penetrates and characterizes think tanks, academia and the media – with the pro and anti AKP sides clearly defined. I argued with one professor at Ankara University that this is no different to most political societies, such as Britain or, more obviosuly the liberal-conservative divide in the US. But he argued there was a difference: the increasing authoritarian streak of the AKP and its reluctance to accept criticism. In his mind, academics and think tanks aligned with the AKP were too sensitive to Erdogan’s refusal to be questioned and lined up behind him and foreign minister Davutoglu in their books, papers and op-eds. While in the past under secular governments, secularists like himself would happily have critiqued policy, today under an Islamist government, Islamist scholars were not extending the same service. In his mind, this undermined democracy given that any leader does better when criticized by friends than surrounded by sycophants.

This criticism was partly born out by my interviews with pro-AKP scholars and think tankers on Syria. To them, the government’s policy towards Damascus is the best that can be hoped for in difficult circumstances. Turkey was correct to engage with the Ba’athist regime in the 2000s, they were also correct to try to persuade Assad to embrace reform when the Arab Spring began and then, when it was clear that he was not going to, they were correct to cut ties and call for his removal. The opposition, feel quite differently. The critics accuse the AKP of lurching from one extreme to the other: being too close to Assad in the past and now rushing too far the other way by calling for a neighbouring regime to be toppled and, allegedly, arming the opposition. As the vice-chairman of the CHP told me, “There is nothing with which we agree with them [the AKP] on Syria.” The leader, Kemal Kılıçdaroğlu, reiterated this point in public a few days later when he proclaimed at the conference that ‘Turkey does not want war with Syria’. Columnists and academics who oppose the AKP have been even more critical to me in private, calling its Syria policy, ‘naïve’, ‘arrogant’, ‘hypocritical’ and ‘unwise’. Of course, the pro-AKP academics retort that such critics are just criticising for criticism’s sake and that they would oppose any AKP policy whatever it was. Nevertheless, it illustrates quite neatly how divided Turkish politics and society are between (loosely) supporters of these two main parties. Even on an issue that one would think was black and white: a Syrian dictator killing 15,000+ of his people, the battle lines are drawn.

The students want the fall of the regime!

As I was passing back through Istanbul from Ankara to Amman, I came across a small group of Syrians protesting in Taksim Square, Istanbul’s central public space. The group was small, maybe 20 people at most, and they waved the Syrian opposition’s green, white and black ‘Istiklal’ (Independence) flag. Talking to them for a while, it transpired most were students who were already studying in Istanbul when the troubles in Syria broke out. A few, though, were recent arrivals such as one student’s younger brother who fled his home in Homs a month ago due to, “all the trouble there.” Another was a Syrian tourist who lived in Saudi Arabia and was just visiting Turkey with his wife when he stumbled across the protest and joined in.

Despite the fact that the – mostly very young – crowd was beaming following the news that four senior regime figures including Bashar al-Assad’s feared brother-in-law Assef Shawkat had been killed in a bomb attack the day before, it was noticeable how small the protest was. “People [Turks] here support us,” said one student, “but it is the middle of the day and it is too hot. More will join in later.” I was not convinced. Worthy though the small group’s protest was, as I have said before, in my time here I’ve generally detected ambivalence among Turks towards the Syrian uprising. No one likes Assad or the mass slaughter he is conducting (indeed my Leninist-Marxist taxi driver in Ankara described him as ‘like Hitler’) but it doesn’t seem to concern Istanbullus enough to take to the streets. After years of deliberate detachment from the Arab world, irrespective of their government’s recent reengagement (for better or worse), most residents of Istanbul and Ankara still seem to see the Middle East as a world removed from them. One suspects that until the crisis actually overspills directly into Turkey (as it did briefly with the Jet crisis), this attitude won’t change. Nevertheless, I wished my young Syrians friends luck with their protests and hoped that we would meet again in free Syria, before heading to Jordan. 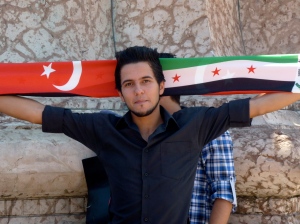